[ACCEPTED]-Unit testing: why is the expected argument always first in equality tests?-unit-testing

It seems that most early frameworks used 25 expected before actual (for some unknown reason though, dice 24 roll perhaps?). Yet with programming languages 23 development, and increased fluency of the code, that 22 order got reversed. Most fluent interfaces 21 usually try to mimic natural language and unit testing frameworks 20 are no different.

In the assertion, we want 19 to assure that some object matches some conditions. This is the natural language 18 form, as if you were to explain your test 17 code you'd probably say

Difference 13 may not be huge, but let's push it further. Consider 12 this:

Hm..? You probably 11 wouldn't be too surprised if somebody told 10 you that roses are red. Other way around, red are roses, raises suspicious 9 questions. Yoda, anybody? 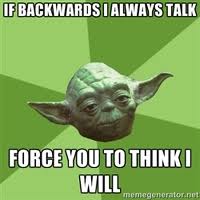 It gets even more unnatural when 8 your assertions are more complex:

How would 7 you reverse that one? More than 15 trees are being had by forest?

This claim (fluency 6 as a driving factor for modification) is 5 somehow reflected in the change that NUnit 4 has gone through - originally (Assert.AreEqual) it used 3 expected before actual (old style). Fluent extensions 2 (or to use NUnit's terminology, constraint based - Assert.That) reversed 1 that order.

I think it is just a convention now and 15 as you said it is adopted by "every unit 14 testing framework (I know of)". If you 13 are using a framework it would be annoying 12 to switch to another framework that uses 11 the opposite convention. So (if you are 10 writing a new unit testing framework for 9 example) it would be preferable for you 8 as well to follow the existing convention. I 7 believe this comes from the way some developers 6 prefer to write their equality tests:

To 5 avoid any unwanted assignment, by mistake, writing 4 one "=" instead of "==". In this case the 3 compiler will catch this error and you will 2 avoid a lot of troubles trying to fix a 1 weird runtime bug.

Nobody knows and it is the source of never 3 ending confusions. However not all frameworks 2 follow this pattern (to a greater confusion):

I don't know but I've been part of several 13 animated discussions about the order of 12 arguments to equality tests in general.

There 11 are a lot of people who think

in C-based languages. The reason for 9 this is that if you accidentally put a single 8 equals sign:

will give you a compiler error, but

might 7 not, and would definitely introduce a bug 6 that might be hard to track down. So who 5 knows, maybe the person/people who set up 4 the unit testing framework were used to 3 thinking of equality tests in this way -- or 2 they were copying other unit testing frameworks 1 that were already set up this way.

why did JUnit do it that way? I 1 don't know, ask Kent Beck!

My view for this would be to avoid any exceptions 2 eg: 42.equals(null) vs null.equals(42)

where 1 42 is expected null is actual

How are people unit testing code that uses Linq to SQL

JUnit 4: Set up things in a test suite before tests are run (like a test's @BeforeClass method, just for a test suite)

How can I do unit testing in Perl?

Unit test for a method that takes a HttpResponse object as a parameter. OutputStream is not available

How to mock a function call on a concrete object with Moq?

How to change the date/time in Python for all modules?

What is the preferred unit testing framework for Perl?

How can I display more info in an error message when using NUnit Assert in a loop?